Okay, so these baby chicks have grown up and you are starting to get eggs, possibly lots of eggs.  You now have to think about the comfort and cleanliness of your nest boxes. How do you manage them and encourage the ladies (hens) to lay in the right spot and in a clean environment? 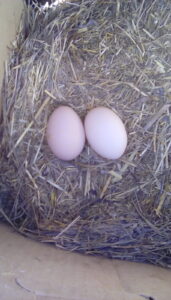 What Do The Hens Need?

What kind of nesting material should you use?  What do you have on hand?

We have used wood shavings (the kind you buy in a big compression bag), old hay, plain cardboard, and grass clippings.

My favorite of all of these is grass clippings.  The wood shavings were too small and airy and too easy for the chickens to scrape out of the nesting box.  Hay works pretty good, except I don’t have it on hand consistently.  Grass clippings are everywhere in our yard.  I have a yard sweeper, so gathering grass clippings is no problem.  Or I could use a leaf rake to gather enough for the nesting boxes from a recent mowing.

I fill the nest boxes about 2/3 to 3/4 full of nesting material.  The chickens will form it into a nest and push the material out and shape the space to be comfortable for them.

We do not use roll-away egg boxes (even though I have been tempted at times) because of the influence of Joel Salatin and his book The Marvelous Pigness of Pigs.

Well…sad story at the Redeemed Homestead. Both of our sweet boy cats have wandered away.  We didn’t neuter them and they came of age…so now someone with nearby female cats may have a problem.

Strong, sweet Oscar was first to leave. He’d started following us up the driveway to the mailbox, and the big new world out there was starting to grab his attention. Also, he was lonely because Coconut was an invalid in the house at that time. We were nursing Coco back to health, and Oscar was feeling left out, so it seemed the perfect time to seek his fortune in the wide world. 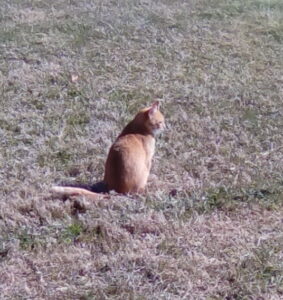 Coco lasted longer. Because he had been mauled (that’s a story for another day), and  we nursed him back to health, we were sure he would stay close to home and not go wandering the treacherous forests at night again. We had gotten assurance from a friend that cats who get nursed back to health after a mauling incident generally stay home afterward, but apparently not forever… Coco did…but only for an while. He grew lonely because of Oscar’s absence, and meowed pitifully at nobody.  We thought he was recovering from his loneliness, but he wasn’t. He was just getting ready to go find another cat friend. One day, he too followed us up to the mailbox, occasionally stopping to survey the adjoining field. We swayed his interest then, but a few days later, he too was gone. 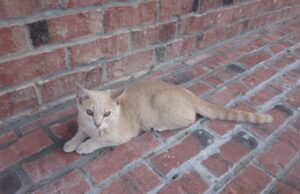 So, what happened? Why did these little guys run away?

Well, we have a few ideas:

So, it looks like we’re fresh out of cats. But there is still a glimmer of hope. A friend told us that their cats have run away and stayed away for a few years, and then suddenly reappeared, ready to start over. So maybe they’ll return. But then again, maybe not. You never know. Maybe we’ll just have to get some new ones.